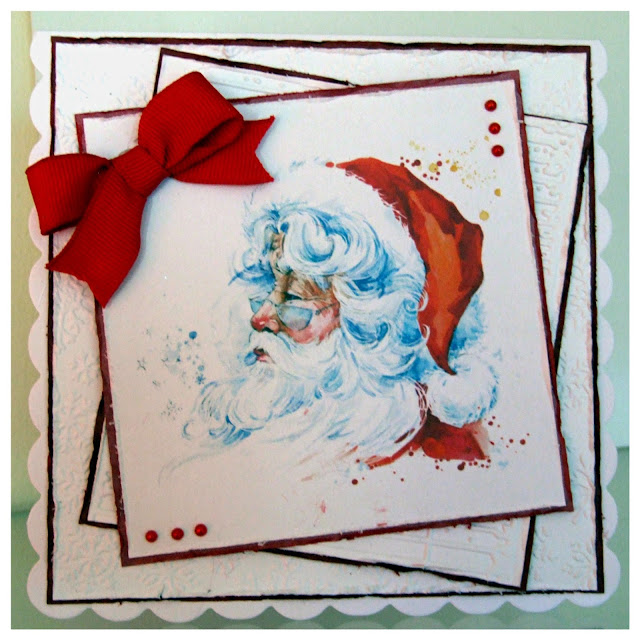 Firstly, apologies to any followers I have not caught up with yet, I will visit asap.
We had a fantastic holiday with the temperatures up in the high 70's F /low 80's F, it did make it tiring as it was also quite humid some days.( I didn't expect it to be as warm and locals said it was warmer than normal for the time of year)
We squeezed as much in as possible and hardly took time to relax there was so much to do and see.
On a visit to the Florida Mall I saw a Father Christmas Grotto it was so strange to see a him fully dressed in his suit with fur trim in the blazing sunshine, not at all Christmassy. We returned to clear skies and a hard frost a bit of a shock.

I now need to work on finishing my Christmas cards, so a simple design and layout today. The image is from the Making cards Christmas Special, I thought I had missed out on it but managed to get it in Aberdeen the day we left. The embossing folders are both from Crafter's Companion.

He's a super looking Santa, just as you'd expect him to be. Love this fabulous image and CAS design. Glad you had a wonderful time, albeit tiring.
Lorraine

What a beautiful image and fabulous design to showcase him! Thanks so much for joining in the fun at our Double D ‘Traditional Christmas Colors’ challenge! We hope you’ll come back often.

A fabulous card and a great layout. Sounds like you had a wonderful holiday too.
Kath x

Beautiful image and the bow is spot on with this design. I love it. It's simple, but sometimes less is more and this card certainly doesn't need anything more.

A gorgeous Christmas card Meg, such a wonderful Santa image.
I'm so pleased that you had a fantastic holiday, it must have been a bit of a shock coming back to a frost!
Pauline
x

A gorgeous card and layout. Thank you for sharing with us at Winter Wonderland Challenge. Marlene DT

A gorgeous card and layout. Thank you for sharing with us at Winter Wonderland Challenge. Marlene DT

Oh Meg, it's beautiful, gorgeous Santa and a fabulous design. Pleased you had a good holiday, recharged batteries all set for Christmas, Kate x

Super cute!!! Thank you for joining us at TMCC, good luck!!! Amy DT

Beautiful Christmas card Meg. Thank you for playing along with our Challenge at Christmas Cards All Year Round. We would love to see you again ... Anet DTx

Lovely card, Thanks for joining in with our challenge at ABC Christmas Challenge,
hugs Samantha :0)

Gorgeous layered card!Thanks for playing along at Christmas Card Challenges.

Hi Meg! I love seeing your cards in blog link-ups...they are always among my favorites! Thanks for linking up with us at CCAYR! :)

Stunning work! Lovely christmas feel to it. Thanks for joining us over at Winter Wonderland!
Love n hugs
Marie

Beautiful card Meg. Love that image.
Thanks so much for joining us at Winter Wonderland.
Lou DT xo

Great card!!! Thanks so much for participating in our CHRISTMAS CARDS ALL YEAR 'ROUND challenge. Hope you participate in our next challenge!! Have a happy crafty day!!!
Deanne at A Little Bit O’ Paper