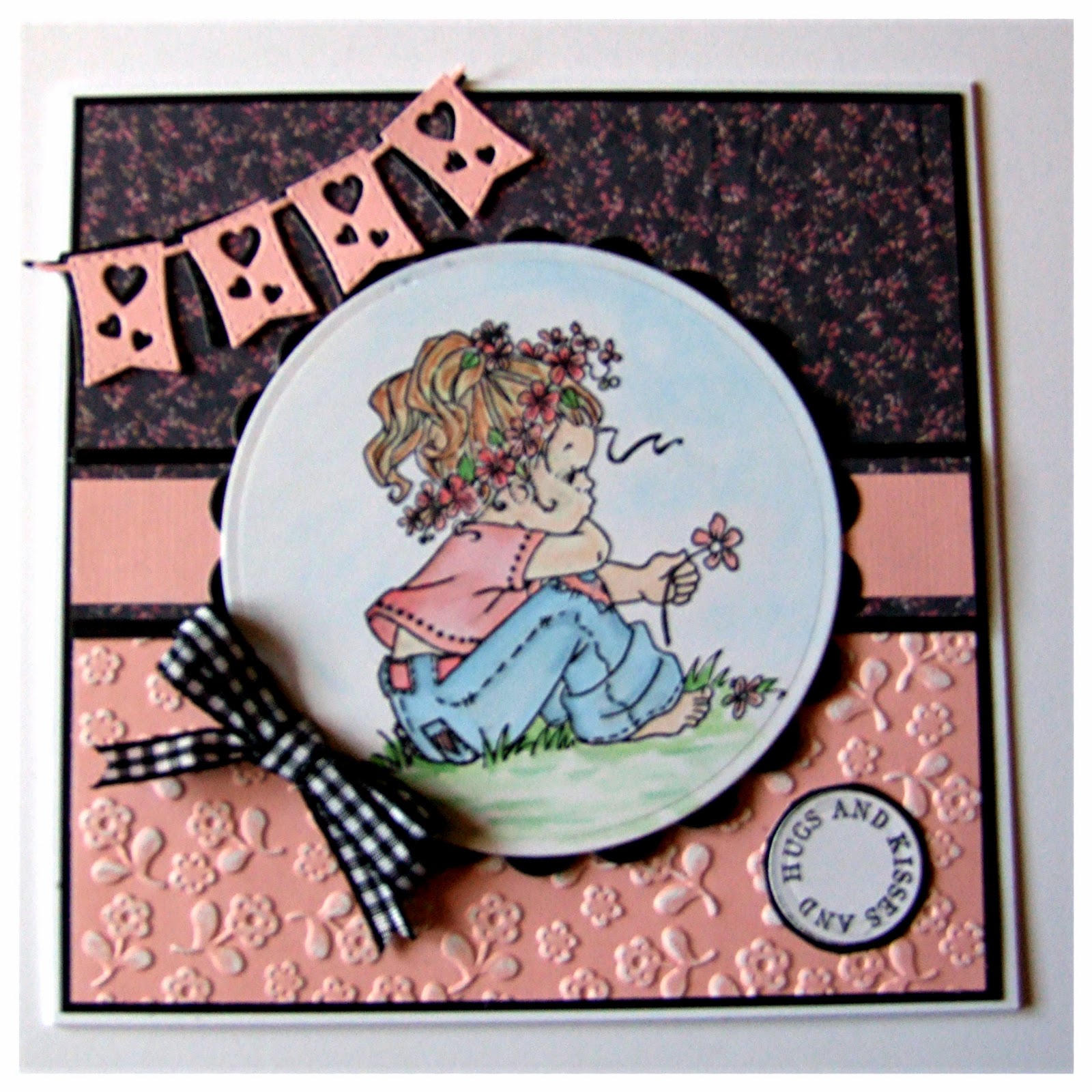 I have very few girly girl friends or family members but decided to make a card suitable for a female but not make it too girly.I hope I have succeeded in this.

Had a great day out yesterday meeting my eldest son in Aberdeen, shopping having lunch and going to the pictures seeing him twice within two weeks is a record for me, as I had to transport James the 10 miles to school and home again at night it didn't leave time for a trip to Aberdeen. I love living in the country but we are 10/11 miles away from any public transport and the school James went to was in Moray not Aberdeenshire where we live.


Stamp from Sugar Nellie, one of the first stamps I bought and probably one of my favourites, she looks so thoughtful I wonder what she's thinking
Paper from Nitwit Collections
Banner from Joanna Sheen Signature Collection

This is gorgeous! Your beautifully colored image is adorable. Love the embossed pattern and the bow. Thank you so much for joining us at the Simon Says Wednesday Challenge Blog. :)

Thank you for Linking Up at PDE Linky Party.
Your project is featured on our Facebook Page today and linked to your blog!
~Janis
Pause Dream Enjoy Page on Facebook

Such a great link up! Thank you for sharing this with us.
Jackie dt @ Pause Dream Enjoy

Ahh this is so sweet, what a great card, Thanks for playing along on our Special Challenge on MAWTT, Love Hazel (Didos) xx

Your card is absolutely beautiful! I love the sweet little girls, and the colors and embossing are fabulous! Thanks for joining us at the Pause Dream Enjoy Linky Party.
DT - Lori

Wonderful card! Layout and image.
Thanks for joining us at Ladybug Crafts Ink xx

Aww this is really sweet Meg… such a cute image and you've coloured her beautifully! I love the pretty embossing and fab bunting… think you've hit the mark here… it's perfect for a female but not too girly!
Thanks for joining us at MAWTT this week! :-)
Glad you had a lovely day out with your son… it must be nice to see him more often. I can't imagine living so far away from a school… I had a 15 minute walk to school as a child and came home for dinner... must have kept me fit all that to-ing and fro-ing. I thought that was far to walk! don't think they walk even that distance to school nowadays.
Hope you have a lovely weekend!
Big hugs
Sue xx

My name is Wynneth said...

Gorgeous card Meg pink and brown is one of my all time favourite colour combos. I just love this image, Daisy is such a sweet stamp and it's so lovely to see her again. Great pink bunting too. Thanks so much for playing along with our CCT challenge this week.

What a sweet summer card! I love your colo combo. Thank you for joining us at Fairy Tale Challenge. xx Bianca

oh its just beautiful hunny and I love the embossed cardstock on the bottom.
Thank you for playing along with us over on the divas by design blog this week
hugs Lou xx

Awesome embossing and colouring! Love your card!
Thanks for sharing it with us at That Craft Place!

Gorgeous looking card. Lovely embossed. Thanks for sharing your card with us at I Love ProMarkers. Hope to see you back soon. Good luck, hugs from Lisbeth

This is gorgeous, love this sweet image and the orrery colours! Thanks for joining in with our 5th birthday celebrations at MAWTT this week!! Pami x

Adorable, love the texture!! Thanks for linking up at PDE Linky party. Lee-Ann DT