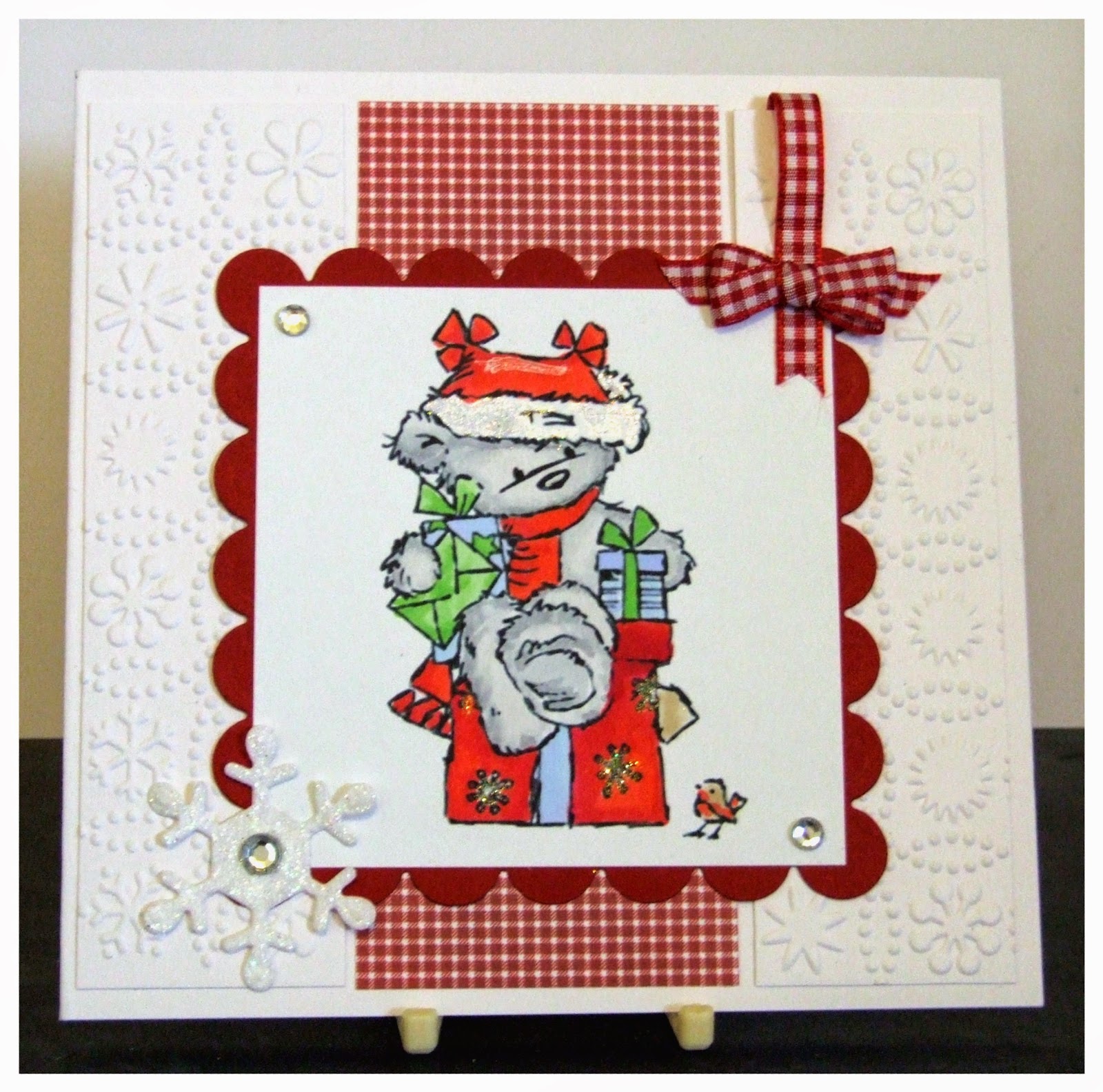 Apologies that this card is similar to one entered into challenges last week, when I made the original card I also coloured this stamp, due to being very busy I don't have time to craft as much this week and this card fits several challenges.
Hubby unfortunately had an altercation with a Highland cow on Thursday, he was going to help our neighbour trim them after the vet had sedated them. The sedation didn't knock them out and when the vet was administering a further dose of sedation one of them charged out of the enclosure knocking down the gate and fence, taking with it my husband and our neighbours son. Jim describes flying through the air then landing against a strainer post hitting his hip, arm and head. He also tore his back on the barbed wire fence, his jacket and t-shirt were ripped beyond repair but his cashmere jumper had only the tiniest hole in it, explain that to me. He also managed to hit his forehead on a beam after getting up .
His tetanus jabs weren't up to date and he reluctantly agreed to go to the local hospital to have one and be checked over.He's now really stiff and sore and has a beautiful array of bruises.


Stamp from Lili of the Valley
Paper from Nitwit Collections

Oh my, your husband sounds as if he has been lucky escaping really serious injury, but of course not lucky in being thrown by a bull, hope he soon recovers.
I love the card you have made, such a cute image and great design and layout. Thanks for playing along with our 'Gingham or Checks'challenge at Winter Wonderland this week, and good luck
Eileen x

A cute Christmas teddy, beautifully displayed with the gingham ribbon. Love the embossing too. Sorry to hear about your husband. Hope his bruises heal quickly.

Thanks for joining us at 52CCT this week.

Hi Mag, I was going to ask after your poor hubby, it could have been more serious, bad enough as it was, poor man, I hope he mends soon. Good luck about the cashmere though.
Lovely card, love the red and white and the cute image, hugs Kate x

What an adorable card. Your colouring and paper choices are wonderful. Thank you for joining us at The Glory of Christmas. Myrna DT

Oh no Meg… I really hope your hubby and neighbours son are ok… that sounds awful… glad that he got checked out at the hospital and hope he feels lots better very soon!!
Aww your card is gorgeous… such a sweet image and I love the gingham paper and ribbon… the embossing is so pretty… like icing on a cake! :-)
Hope your next week goes well !!
Big hugs
Sue xx

Thanks so much for sharing your lovely work with us at Allsorts challenge.

Totally adorable. I love the image and your coloring. The background is awesome! Such a cute image! Thanks so much for joining us at Christmas at Sweet Stampin' this month. Hugs, Gail

What a fun Christmas card. Great textured background and I love the red and white gingham! Super cute image - beautifully coloured. Thanks so much for playing along with 52CCT this week!

Firstly, I hope your hubby is on the mend. Sounds like he narrowly escaped serious injury. Now on to your card - how adorable is that! LOTV always hits the mark on cuteness. Well done, Meg. Thanks for joining our August Pick A Previous Sketch challenge at 52 {C}CT. Have a lovely day!
hugs, Asha

Such a cute card! I do remember your card from last week as this one looked familiar before I even started reading. But it is different and thus, quite all right. : ) Again, I really like that checked ribbon and this adorable image! Thanks for playing with CSAYL.

Such a sweet card, and an adorable image. Thanks for joining Allsorts challenge. Good Luck.
Happy crafting
Tracy x

OMGoodness, your poor hubby! I hope he is healing after that accident! And your card is so cute! Love the gingham! Thanks for playing our Christmas Card Challenge!

wonderful card, thank you for enjoy us at the glory of christmas challenge, love, patty

I do love that little James Bear and you've done a grand job on this card. I hope your hubs is better after the row with the cow... that's serious stuff.
Thanks for joining us at Christmas at Sweet Stampin' and I hope you'll be back again.
Marilyn